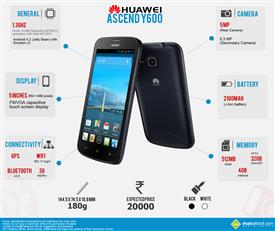 Huawei has unveiled the latest smartphone Ascend Y600 in the Y-series. With the addition of Ascend Y600, the company has increased its series of smartphones. The device is attractive as far as the looks are concerned. This phone is designed, keeping in mind the increasing demand for bigger display.

It runs on Android 4.2 Jelly Bean and processing on 1.3GHz dual-core MediaTek MT6572 processor with Emotion UI which powers the device. The phone comes with a 5.0-inches FWVGA, multitouch and IPS capacitive display with an elegant metallic framing. It provides a resolution of 854x480 pixels. Ascend Y600 comes with a option for HD video and image calling. The device is equipped with 512MB RAM and coupled with an inbuilt memory of 4GB which is expandable upto 32GB via microSD card. The smartphone boasts 5.0-megapixel camera with LED flash and 0.3-megapixel front facing camera. Y600 has an option for dual sim (2G and 3G).

On the connectivity front, it offers with Bluetooth, Wi-Fi, GPS, GPRS and 3G. There is no hard button present on the front of the phone, only three soft keys below the display which become visible once the screen is on. The phone is preloaded with some of free google games and applications. The device is available in two color options: Black and White. The phone is equipped with Li-Po 2100mAh battery which ensures better usage time.

Be the first to write a review for Huawei Ascend Y600