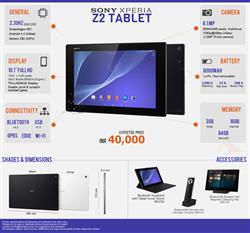 Sony Xperia Z2 Tablet is the latest addition by SMC introduced at MWC in Barcelona in February, 2014 as the world's lightest and slimmest waterproof tablet with fabulous entertainment experience which will launched globally by the first quarter of 2014. It has a powerful and non-removable Li-Po 6000mAh battery with a standby time of up to 1200 hours, a music playback time of up to 188 hours, a talk time of up to 13 hours and a battery STAMINA mode. It also has an integrated Qualcomm Quick Charge 2.0 technology which enable this device to charge up to 75 percent faster than normal devices. It has a height of 266mm, a width of 172mm and a thickness of 6.4mm as its dimensions along with a weight of 439gms and runs on 2G(GSM 850/900/1800/1900 MHz), 3G(HSDPA 850/900/1700/1900/2100 MHz) and 4G(LTE Bands 1,2,3,4,5,7,8,13,17,20) network frequencies. With Sony's OmniBalance design, it has an elegant shape with subtly round edges, smooth and reflective surfaces on all sides, a beautiful glass-paneled front and an enhanced reflective coating that reflect the world around you along with IP55 and IP58 certified water-proof and dust-resistant feature. It is available at Sony's official website at a pre-order price of 500 pounds for 16GB LTE version, 400 pounds for Wi-Fi only 16GB version and 450 pounds for Wi-Fi only 32GB version with a free magnetic charging dock too in White and Black shades.